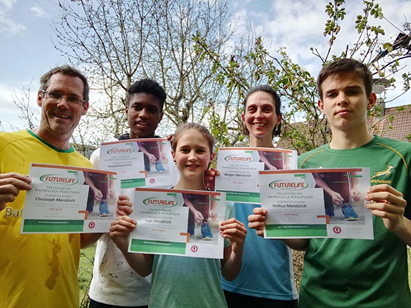 Local brand FUTURELIFE® challenged families from all over the country to get off the couch and make history by entering South Africa’s first-ever virtual marathon, the FUTURELIFE® Bambelela Marathon Challenge.

Inspired by South Africa’s lockdown and everyone’s efforts to flatten the COVID-19 curve, the FUTURELIFE® Bambelela Marathon Challenge’s goal was to involve the entire family in a fitness event that promoted both mental and physical health in these unprecedented times, whilst simultaneously raising much-needed funds for the Hillcrest Aids Centre Trust (HACT) COVID-19 Emergency Relief Fund.

According to FUTURELIFE®’s Marketing Director, Bhavna Maharaj our nation did not disappoint! “We are thrilled to announce that we had just under 1000 entries from runners and walkers from not only around the country, but the world too! Children as young as 9 years old, and folk from as far as Dubai and Australia took part in the challenge (completing either 5km, 10km, 21.5km or 42km) and in the end, their combined efforts helped us raise over R124 000!”

Maharaj adds that Bambelela is a Zulu phrase meaning ‘stay strong’. “As South Africans, we are incredibly strong and resilient by nature and so it was no surprise that the message behind the name resonated with so many. What was particularly remarkable however was that despite poor weather conditions in some areas of the country, and little to no running space (some did it in their apartments!), people still chose to get creative, ‘stay strong’ and complete their entered mileage. To say that it was inspiring would be an understatement!”

Myles Buxton, Durban runner, and race organiser was equally impressed by the turnout. The virtual marathon was his brainchild and he says that he is in awe of the results, “Initially when I came up with the idea, I thought that a couple of hundred people taking part would be a massive win, never in my wildest dreams did I think we would end up raising over R124 000! It goes to show that despite the uncertain times we are living in, the spirit of Ubuntu is still alive.”

“On behalf of FUTURELIFE® and the HACT, we would like to thank every single runner and walker who participated in the challenge. The money raised is desperately needed by HACT and will go to ensuring that its dedicated team, who are working at the frontline of this pandemic, can continue doing what they do best – saving and transforming lives,” Maharaj concludes.