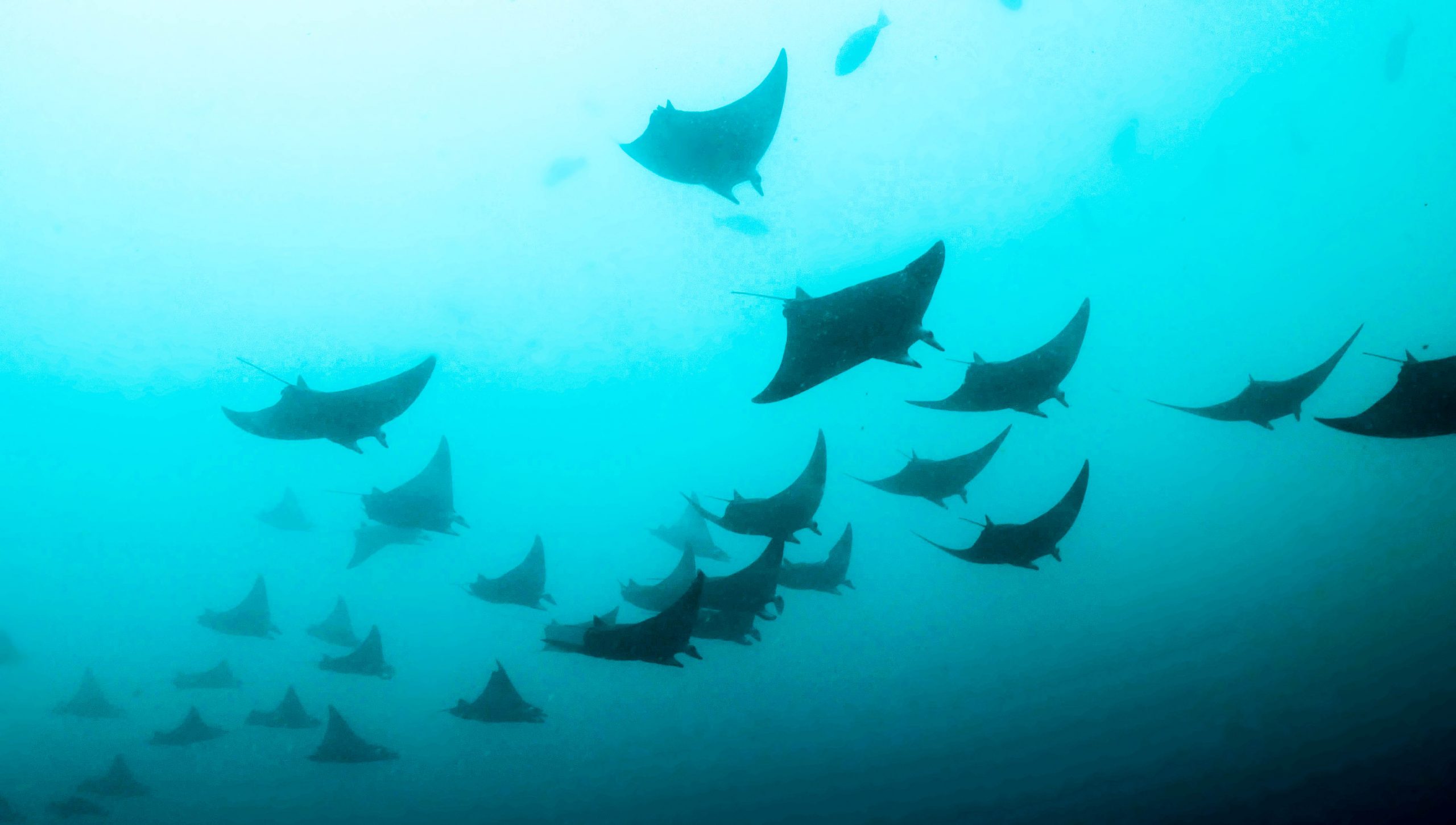 Aliwal Shoal, one of two Marine Protected Areas (MPA) on the KwaZulu-Natal South Coast, is a world-renowned dive site attracting adventurers looking to swim with hundreds of sharks of varying species including black tips and ragged tooth sharks. And while it certainly ticks the boxes on all shark divers’ bucket lists, Aliwal Shoal has recently been found to home a number of the highly-endangered shortfin devil rays which use the area as a cleaning station.

Michelle Carpenter, a local KZN diver and PhD student specializing in sharks and rays, discovered the Aliwal Shoal devil ray cleaning station back in 2020: “At the time, I didn’t realise how many rays lived in and frequented Aliwal Shoal. But I’ve been working on my project for over a year now, which means visiting the site almost daily for field work, and have been overwhelmed by the incredible ray diversity as well as the numbers being encountered. In fact, Aliwal Shoal has even more diversity in terms of rays than it does sharks.”

Rays, which are the dorsal-ventrally compressed, or flattened sharks, do not always draw as much attention as sharks. However, both sharks and rays actually both belong to the cartilaginous group of marine fishes called ‘elasmobranchs’.

Carpenter said this site is fortunate to be home to one of the world’s first discovered devil ray cleaning station, following another such discovery at Bazaruto Archepelago: Cleaning stations are important areas on a reef where a marine animal – such as a ray, turtle, shark, or fish – will visit to have parasites removed or wounds cleaned by cleaner fish. These sites function as resting areas and mating grounds for hundreds of marine life species.”

Aliwal Shoal, which can be located just 4 kilometres off the coast of Umkomaas, is one of two MPAs found in this region. The other is Protea Banks, which can be found 7.5 kilometres off Shelly Beach. MPAs have been established to keep marine ecosystems working harmoniously while protecting the ocean life under the National Environmental Management: Protected Areas Act. These two are home to a variety of big marine life such as sharks, whales, turtles, rays, king fish, yellow fin tuna and barracuda.

Commenting on shortfin devil rays in particular, Carpenter said it was a massive discovery to find them in such large numbers, considering they are classified as ‘highly endangered’ along the southern African coast.

“Some places, such as Tofo in Mozambique, have experienced a decline in sightings of these rays by more than 90% the past few years,” she explained. “This makes the discovery at Aliwal Shoal that much more profound. But it’s not only the numbers of devil rays, it’s also the diversity of ray species that is so astounding.”

Carpenter’s ocean-based research sees her using scuba diving equipment as well as freediving as a way to gather the necessary information while getting close enough to the marine life. She said that, while scuba diving has been the most useful tool in achieving research tasks such as deploying remote cameras to collect footage of cleaning rays, and performing transects of the reef communities including coral and fish, she prefers freediving for close ray interactions.

“Sharks and rays have two additional senses that we do not possess,” explained Carpenter. “These are the lateral line which detect water displacement, and ampullae of Lorenzini which detect electric pulses. I find that the bubbles generated while scuba diving often scares the ray before it approaches you. In various freediving encounters I have been immersed by a school of 50 devil rays, hugged by a giant manta ray, nearly sandwiched by two barrel rolling giant manta rays, and been face-to-face with spotted eagle rays. It is truly magical.”

Michelle is supported by several scuba diving operators, sponsors, and non-profit organisations, without which, this sort of research would not be possible. These include the University of Cape Town, Freediving South Africa, Agulhas House Dive Centre, Marine Megafauna Foundation, ScubaCo Dive Centre, Blue Ocean Dive Resort, and the Rufford Foundation.