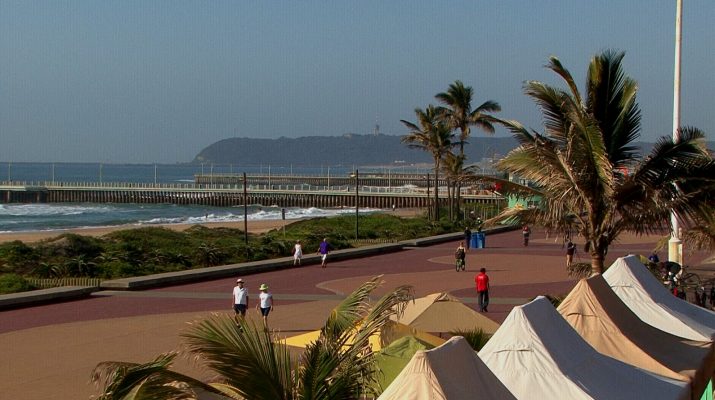 eThekwini’s Mayor Mxolisi Kaunda hosted a webinar in which city leaders discussed the plans being strategised to get Durban running again after weeks of Covid-19 lockdown.

Deputy City manager, Philip Sithole chaired the session in which Mayor Kaunda along with the city’s Chief Financial Officer, Krish Kumar; Nigel Ward, the Senior Vice President of Toyota and President of the Durban Chamber of Commerce and Industry; and Moses Tembe, Co-Chair of the KZN Growth Coalition put forward the ‘new-normal’ measures needed in order for the city to successfully move into Level 3 of lockdown and beyond.

The Mayor began by outlining the impact Covid-19 has had on the economy of the city and Durban’s economic recovery plan.

The impact is clear with an estimated 327 000 people having lost their income or employment completely and unemployment set to rise to 42%. The loss to the city over the Easter period alone is estimated at R300 million in direct spending with a figure of R600 million lost to the GDP and R 4 billion lost in 2020 to hotels and restaurants. A decline in revenue of R64 million from the ICC and R50 million from Ushaka Marine World specifically adds to the losses for the city.

R10bn in Foreign Direct Investment has already been put on hold and another R8.5bn is at risk whilst the GDP is set to drop by 20%. And whilst experts predict that 36% of the Durban economy will return in stage 4 they expect it will take the city 12-18 months to get back to pre-lockdown levels.

The city and its people are certainly in this for the long haul. Krish Kumar, the city’s Cheif Financial Officer admitted the city is in crises as collections on municipal revenues dropped by R1.5bn in April alone. “We’re going to be working on cash-based budgeting, only spending what is needed and as we get the money.”

A much-anticipated review of the tariffs and finalisation of the budget recently put out for public comment will be completed by Sunday 24th May. He added that the city wants to ensure that municipal charges are in line with a stimulus package to ensure sustainability and growth for Durban business.

Various measures are being considered including wavering of development application fees, a rental holiday for informal traders and the re-categorisation of B&B establishment’s rates from business to residential amongst others. Mr Kumar added that a rates amnesty plan is being considered particularly aimed at hotels and other businesses in arrears of more than 90 days to arrange for a reversal of the interest on condition of a 50% payment on the current debt as part of the relief strategy. Treasury is also looking at the implications of discounts on municipal leases in tourism spaces such as the Beachfront, for a maximum period of 3 months provided rental is market-related.

Mr Kumar added that it was vital for the city to work with residents and business to make affordability the criteria and ensure the sustainability of consumers and businesses taking cognisance of the trying times we are all going through. Adding that “The responsibility of rebuilding lies with everyone, the city, business partners and citizens if we are to return to our aim of 6% economic growth.”

The city certainly still has incredible development potential, some of which DUrbanTV focused attention on in the Urban Renewal programme sponsored by Invest Durban.

Mayor Kaunda added that to reposition the city to its former glory the ‘new normal’ would require a coordinated, responsive, pro-active effort from everyone. From a business perspective, he emphasised the need to elevate the roles of co-ops and local enterprises to stimulate the economy and assured business and citizens that ‘the Christmas is over’ for those businesses who believe a relationship with an official will get them a tender, adding that all tenders will be assessed fairly and according to the requirements.

He asked that street cleaning, lights and water issues be reported immediately by citizens and then acted on efficiently by the city to prevent unnecessary losses. Mayor Kaunda appealed to all business to provide screening and the necessary PPE to workers to ensure that there is no transmission of the virus that could lead to a reversal of the city’s lockdown level.

As the city moves closer to operating at level 3 he urged all citizens to wear masks and for residents to abide by the social distancing protocols, particularly in our townships which pose the most risk for the rapid spread of the virus.

Crocworld Easter Holiday fun is on