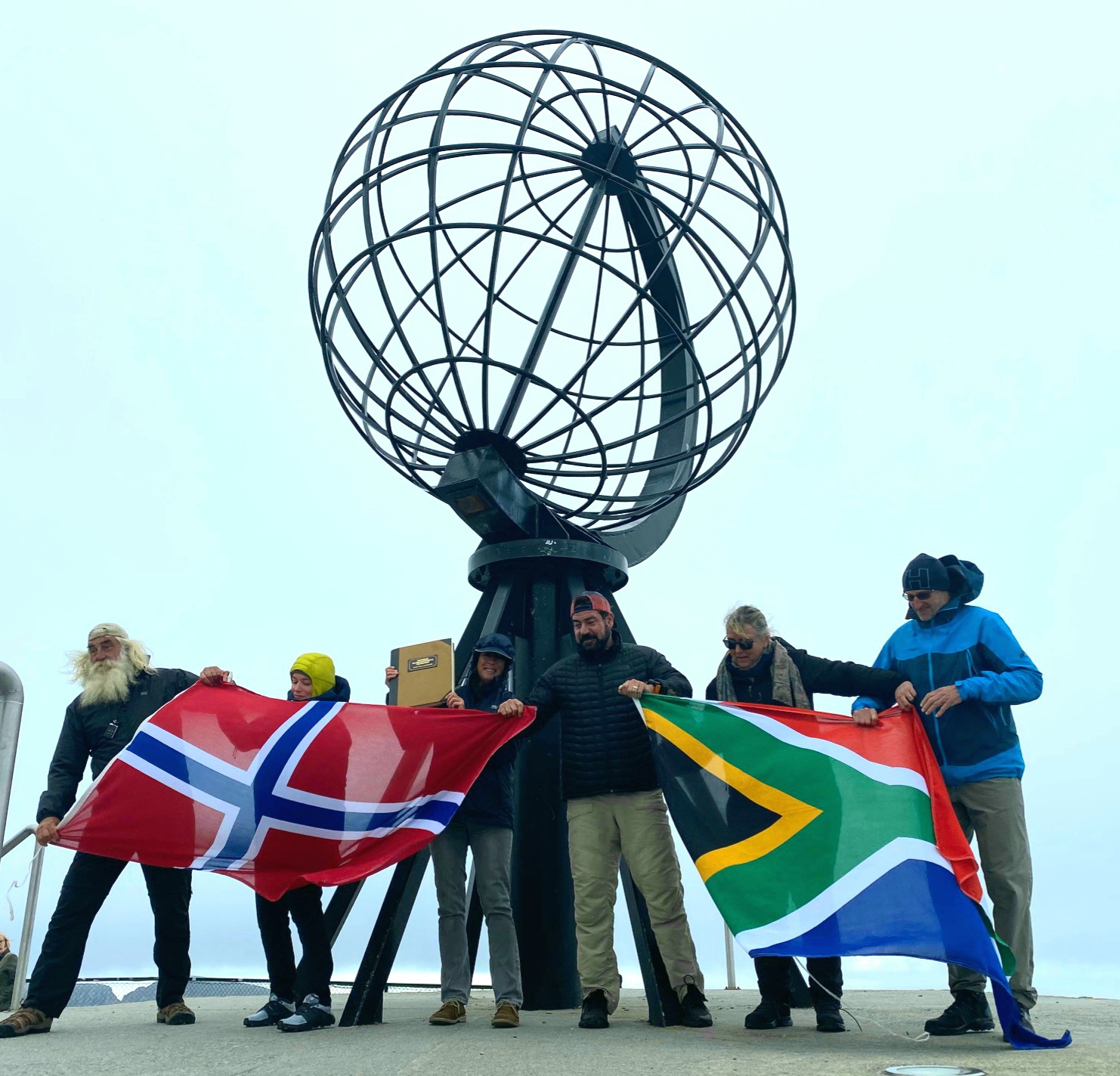 Nine months and close to 35,000 kilometres after setting out from Cape Agulhas on the southern tip of the African continent, the South African-based Kingsley Holgate expedition team has reached Nordkapp in Norway’s Arctic Circle. Two years in the making, it is the first ‘Hot Cape to Cold Cape’ transcontinental expedition to travel the entire length of Africa and Europe in recent years, and the 40th geographic and humanitarian odyssey for the renowned explorer and his experienced team. Speaking from Nordkapp, a jubilant Kingsley said, “At the latitude of 71 degrees north, this is the most northern extremity of Europe you can drive to. Here, 300-metre-high sheer cliffs plunge down into the Arctic Ocean, which stretches to the North Pole. “We arrived in the midst of an unseasonal Arctic storm with howling winds, thick mist, freezing rain and near-zero temperatures. But despite the severe conditions and over 270 days of hard travel since leaving Cape Agulhas, it was a momentous moment for the entire team as we proudly flew the South African flag at Nordkapp’s famous Globe monument, which marks the ‘top’ of the world.”

To give the occasion some African flair, the team built an isivivane (stone cairn) on the Nordkapp cliffs topped with pebbles from Cape Agulhas, and symbolically emptied seawater collected from Africa’s southern tip where the Indian and Atlantic Oceans meet, which has been carried in the well-travelled Zulu calabash.

As with all Holgate expeditions, this Defender Transcontinental Expedition was also a journey of purpose. Travelling in three expedition-kitted new Land Rover

Defenders, the six-member team conducted humanitarian work that assisted some 300,000 people along the expedition’s route through Africa.

The crossing of Africa was not without challenges. “When we started from Cape Agulhas, cross-border travel was extremely difficult because of Covid-19 restrictions,” explained expedition leader and logistics expert Ross Holgate, Kingsley’s son. “Add to that, wars and uprisings across the breadth of North Africa meant that for the first time in decades, Africa was pretty much off-limits to overland travellers.

“We had to re-route to avoid the civil war in Ethiopia and travel through disputed territories between South Sudan and the Republic of Sudan. In doing so, we inadvertently became the first expedition in 30 years to cross Africa from south to north through the two Sudans.” Reaching Europe, the expedition traversed Greece, North Macedonia and the Western Balkan countries of Kosovo and Serbia, including a re-route through Montenegro, to reach Hungary and Slovakia. Avoiding the war in Ukraine, the team took roads less travelled through eastern Poland close to the border with Belarus and into the Balkan states of Lithuania, Latvia and Estonia. They then crossed the Baltic Sea and traversed the length of Finland, before crossing into Norway at the most northern border point in Europe. “We’re a team who delight in achieving geographic goals,” continued Ross Holgate. “The challenges of these past nine months were all the more worthwhile when the three battle-hardened Defenders finally reached the cliffs of Nordkapp and ‘Shova Mike’ Nixon, who cycled much of the route from Cape Agulhas, arrived on his gravel bike in the freezing Arctic mist and rain.” “What has been an overwhelming experience of this journey is how ordinary people in every country we’ve journeyed through, no matter their age, nationality, culture, race or religion, just want to live in peace,” concluded Kingsley. “The expedition’s Scroll of Peace and Goodwill is full of hundreds of heartwarming messages.

“That’s one of the best things about expanding your horizons through travel and adventure; it gives one hope for the future.”

Before leaving South Africa, this included reaching the milestone of distributing two million nutritional meals to needy families and children at creches in remote rural communities alongside game reserves that are still affected by the long months of Covid lockdown; upgrading poorly resourced early childhood development centres; and provision of clean drinking water to communities in water-scarce regions of northern KwaZulu-Natal. In Africa, the expedition focused on malaria prevention, working with Goodbye Malaria in Mozambique and assisting thousands of pregnant women and mothers with children under the age of five years in other countries where malaria is rife, as well as providing eye tests and reading glasses to elderly, poor-sighted people in remote communities.

A Carbon-Neutral Expedition:This Defender Transcontinental Expedition is also one of the first carbon-neutral expeditions in the world. Before leaving South Africa, the Holgate team joined forces with conservation groups in the Eastern Cape to plant 6,000 indigenous Albany Thicket trees to offset the expedition’s carbon footprint, as part of a large-scale wilderness restoration project. They also helped launch a One Million Tree-planting programme adjacent to Tanzania’s famed Serengeti.

Challenge of crossing from South Sudan into Republic of Sudan – additional quote from Ross Holgate:

“We ran the gauntlet of hostile, well-armed militia groups in the UN-controlled region of Abyei – 46 villagers were gunned down nearby –  and we were detained for four days in a Republic of Sudan border military camp before being allowed to continue our journey to Alexandria in Egypt.”

Other notable expeditions by the Kingsley Holgate team:

Previous world-first expeditions include circumnavigating the world following the Tropic of Capricorn; a 449-day journey to track the outline of Africa through 33 countries; discovering the geographic centre-point of Africa deep in the rain forests of the Republic of Congo; and being the first exploration team in history to reach all seven ‘extreme’ geographic points on the African continent.