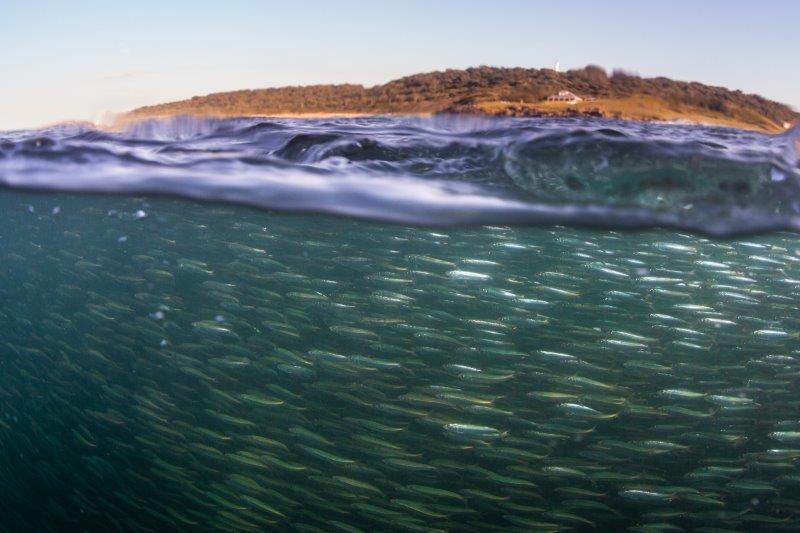 The ongoing cold spell has seen sardine activity increase on the KwaZulu-Natal (KZN) South Coast and Ugu South Coast Tourism (USCT) has been able to share some breath-taking under-water footage of the #GreatestShoalonEarth. These images and videos were taken by Dr Ryan Daly of the Oceanographic Research Institute whilst out spearfishing near Scottburgh.

“What a bonanza of fish we saw yesterday, it was overwhelming with so many sardines! As both a scientist and someone who has been following the sardines for many years, it was amazing to see the volume of sardines,” explained Daly. “Certainly, it’s the most sardines I’ve ever seen on the KZN South Coast. With climate change, potential pressure from commercial fishing and shifts in the way animals respond to environments, many scientists were worried that bumper Sardine Runs were a thing of the past, so it’s fantastic to see the surge in activity. It should bode well for a great season.”

He said the pandemic meant that, unlike previous years, there hasn’t been anyone closely following sardines on the Wild Coast: “We don’t actually know how much activity there was on the Wild Coast and whether this is just a pocket that showed up on the South Coast, or if it was preceded by a much larger volume. We’ll just have to wait to see, over the next few weeks, if this is followed by even more sardines. We certainly are way overdue for a big run!”

Commenting on the recent predatory activity, Daly said the sardine volume had attracted dusky sharks, bronze whaler sharks and spinner sharks to feed on the shoals, as well as big game fish such as couta fish, tuna and snoek.

“It was great to see that people netted enough sardines for themselves but that there were still so many sardines beyond those that could be netted – what a bounty for the community and wildlife along the coast! It’s been amazing to witness the change in people’s attitudes to the sharks over the years as well,” he continued. “People were releasing sharks from the nets and showing respect for these important aquatic animals. This area is a nursery for dusky sharks in particular, which are endangered, and it was so special to see these sharks and the respect people have for them.”

CEO of Ugu South Coast Tourism (USCT), Phelisa Mangcu, echoed these sentiments, stating it has been one of the best Sardine Runs the KZN South Coast has experienced in a number of years: “In addition to this being a spectacle to witness, the annual Sardine Run provides economic security for commercial fishermen, and food security for subsistence fishermen, as well as generally great fishing for our recreational anglers along the KZN South Coast shores.”

Mangcu said that the recent cold spell had proved particularly beneficial, bringing with it shoals of sardines to various locations along the coastline with netting taking place at Sezela, Ramsgate, Scottburgh, Southbroom and Pennington over the past few days: “This is only the start of this winter event, and we’re looking forward to ongoing marine activity over the coming days. USCT would like to thank everyone who is supporting our local fishermen during this time, as well as those providing support to local restaurants and cafes. We also encourage everyone to continue practising all required health-and-safety protocols, including wearing of masks, regular hand sanitising and social distancing.”

USCT is keeping everyone connected to the Sardine Run digitally during lockdown by uploading videos, images and up-to-date information. Check out the ‘South Coast Tourism’ Facebook page and @infosouthcoast on Twitter for breath-taking images of seine netters on the shore; aerial footage of shark activity by drone pilot @saltywaveslider; and underwater footage by Dr Ryan Daly. For more information about the KZN South Coast and USCT, visit www.visitkznsouthcoast.co.za or download the free ‘Explore KZN South Coast’ app to find a local supplier.