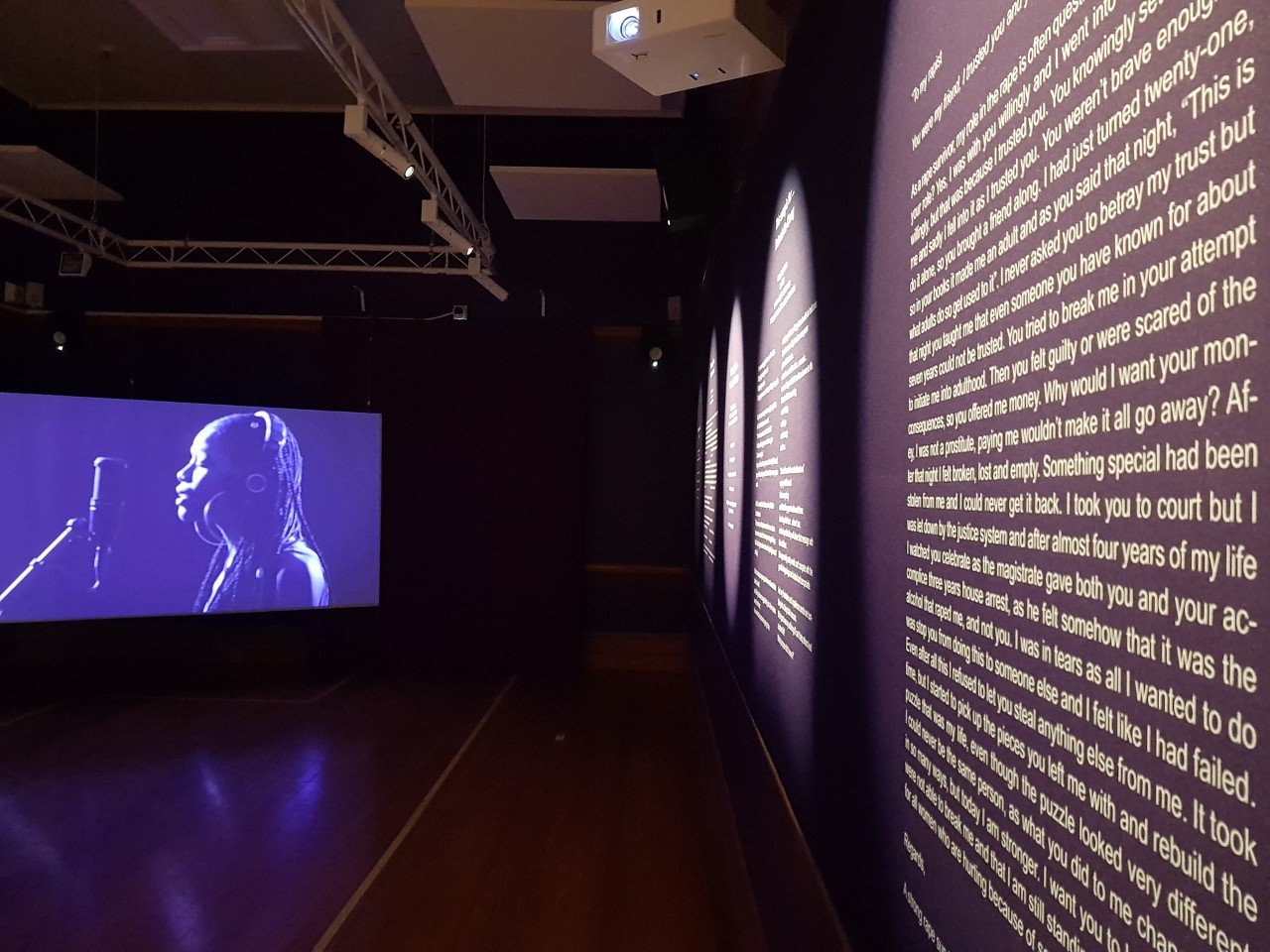 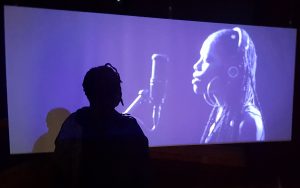 This song is for… A solo installation by Gabrielle Goliath.

South African multimedia artist, gender advocate, and 2019’s Standard Bank Young Artist award winner for Visual Art, Gabrielle Goliath (b.1983), brings This song is for… to Durban Art Gallery. Following its successful run at the Makhanda / Grahamstown National Arts Festival, the Standard Bank Art Gallery, and the Iziko South African National Gallery, the work moves to Durban, where it is being presented as an immersive audio and visual installation.

Gabrielle Goliath, in collaboration with a group of women and gender-queer led musical ensembles, presents a simple and powerful installation informed by the popular convention of the dedication song.

The darkened gallery space features two enormous screens on opposite walls, rolling a series of music videos of songs being performed as newly produced cover versions: each song has been chosen by a survivor of rape. These are songs of personal significance to the survivors – songs that transport them back to a particular time and place, evoking a sensory world of memory and feeling.

As collaborators on the project, the survivors shared not only their songs, but also a colour of their choosing and a written reflection, which is explained in the accompanying wall texts which acknowledge the survivor, the musicians and music credits.

At points in the song, it “gets stuck” – recalling the sense of a scratched vinyl, with a musical phrase being repeated ad-nausium. In her programe notes, Gabrielle explains: “Presented in this performed disruption is an opportunity for listeners to affectively inhabit a contested space of traumatic recall – one in which the de-subjectifying violence of rape and its psychic afterlives become painfully entangled with personal and political claims to life, dignity, hope, faith, even joy.”

Speaking to the work, Goliath reflects: “In a work like This song is for… I am seeking to resist the violence through which black, brown, feminine, queer and vulnerable bodies are routinely objectified, in the ways they are imaged, written about, spoken about… What I have in mind is a more empathic interaction.”

This song is for… is at the Durban Art Gallery, 2nd Floor, City Hall Smith Street entrance (opposite The Playhouse), in Durban City Centre. Gallery hours: Monday- Friday 8:30 to 15:00. No longer open on weekends.

Rhino poaching incidents in KwaZulu Natal have increased by 300% since 2021 as covid lockdown has eased and unemployment entices more criminal activity.
How are our local reserves responding to the threat, to defend our rhino…
WATCH the full story  ONLY on DUrbanTV brought to you by …