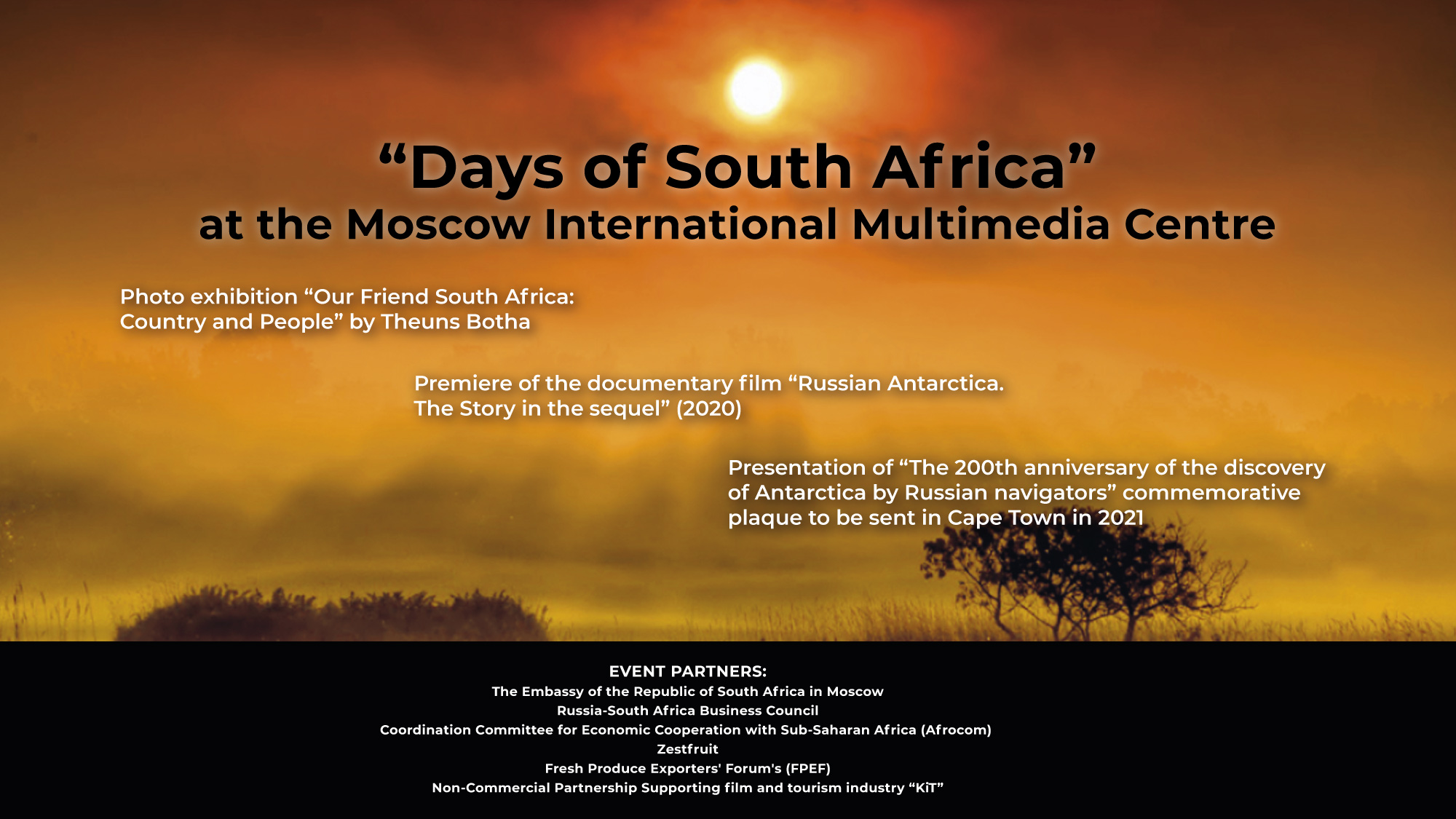 “Days of South Africa” a series of cultural and educational events officially launches at the Moscow International Multimedia Centre (MMMC).

The program will include the opening of the exhibition of South African photographer Theuns Botha – “Our Friend South Africa”, and the private screening of the film ” Russian Antarctica.

The series of events aimed at strengthening humanitarian cooperation between Russia and South Africa is an initiative of the TV BRICS international media network, implemented with the support of the Embassy of South Africa in Moscow and the Russia – South Africa Business Council at the Chamber of Commerce and Industry.

Сhargé d’affaires of the Embassy of the Republic of South Africa in the Russian Federation, H.E.Madivha Aaron Mudimeli will officially open the “Days of South Africa”. The guests of honor will be Igor Morozov, Chairman of the Coordinating Committee for Economic Cooperation with African Countries, and Mikhail Fateev, Head of the Food and Agriculture at the Russia-South Africa Business Council.

The exhibition of the South African photographer Theuns Botha, who collaborated with the largest agricultural magazine in South Africa “Landbau”, will introduce visitors of the MMMC with rural landscapes and sketches from the daily life of local farmers. Photos by Theuns Botha is well known not only in South Africa but also in many countries of the world.

The central event of the “Days of South Africa” will be the premiere of the documentary film “Russian Antarctica. The story in the Sequel” (2020). The film is dedicated to the Russian Antarctic expedition of the Russian navigators F. F. Bellingshausen and M. P. Lazarev on the sloops “Vostok “and” Mirny”, which discovered Antarctica on January 16(28), 1820.

200 years later, the round-the-world expedition of three modern Russian sailing ships “Kruzenshtern”, “Sedov” and “Pallada”, made in the year of the 200th anniversary of this trip, repeated the route of the discoverers of the sixth continent, visiting the Cape of Good Hope at the southern tip of Africa.

The Russian TV premiere of the film will take place on March, 13 on the TV BRICS channel. The international premiere of the “Russian Antarctica” film in English is scheduled on the BRICS TV channel, broadcasting in 30 countries of the African continent.

At the initiative of the non-profit partnership for the promotion of cinema and tourism “KiT”, the program of the Days of South Africa includes the presentation of a commemorative plaque to commemorate the 200th anniversary of the discovery of Antarctica by Russian navigators. The plaque will be installed in Cape Town in 2021.

For more information regarding the program of the Days of South Africa please go the organizer’s website tvbrics.com